ART ON THE MOVE
Search

A brief summary of your and partners’ recent experience in managing similar types of activity.
Neither Prof Davies nor Prof Pomeroy have been directly involved in art projects before. However, they have both been heavily-involved in public engagement. Prof Davies has been involved in many engagement events during his time as Director of the Climatic Research Unit, Dean of the School of Environmental Sciences, Pro-Vice Chancellor for Research, Enterprise and Engagement, all at UEA; UK Natural Environment Research Council Member, and Director of the Fudan Tyndall Centre in Shanghai. Similarly, Prof Pomeroy’s roles as Canada Research Chair in Hydrology and Director of the Global Water Futures programme has public engagement at their cores. Both have extensive experience in managing large-scale international research programmes. Taken together with their research expertises in climate, hydrology, snow/ice dynamics and chemistry, and atmospheric processes, they will prove (indeed, already have) effective partners for this project. They are both seasoned expedition leaders. 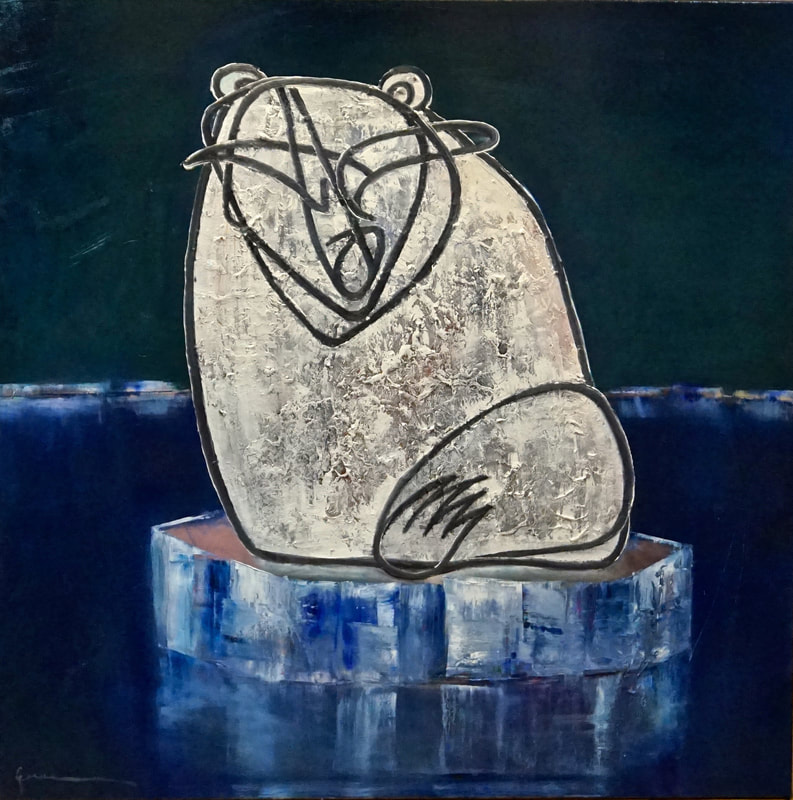 Concise Description
Despite the exhortations of climate scientists over decades, action on climate change has been delayed too long. In the words of David Attenborough, “the collapse of our civilisations and the extinction of much of our natural world are on the horizon”. That prospect, scientists say, will be unstoppable if major actions, not before attempted, and are not taken over the next few years. Whether they are, or not, will determine to what extent the Earth remains inhabitable. The proposed project aims to represent that challenge, stimulating awareness amongst new audiences, via a range of techniques, styles, performance and media. The artist will have unprecedented access to the work of climate scientists, initially in Canada and the UK, and the project will be shown and performed at a number of venues including in the UK and Canada. The linkages between, and dislocations in, those natural systems and societies most at risk will be articulated and shown to the artist by practicing climate scientists – a fusion of science and art. Because of the unprecedented access to a global network of climate scientists, there is a realizable prospect of the project growing and evolving for exhibitions/performances around the world.

Exhibitions in Canada:
The Canadian Centre for Water Forecasting and Prediction at the University of Saskatchewan
The Coldwater Laboratory in Canmore, Alberta. 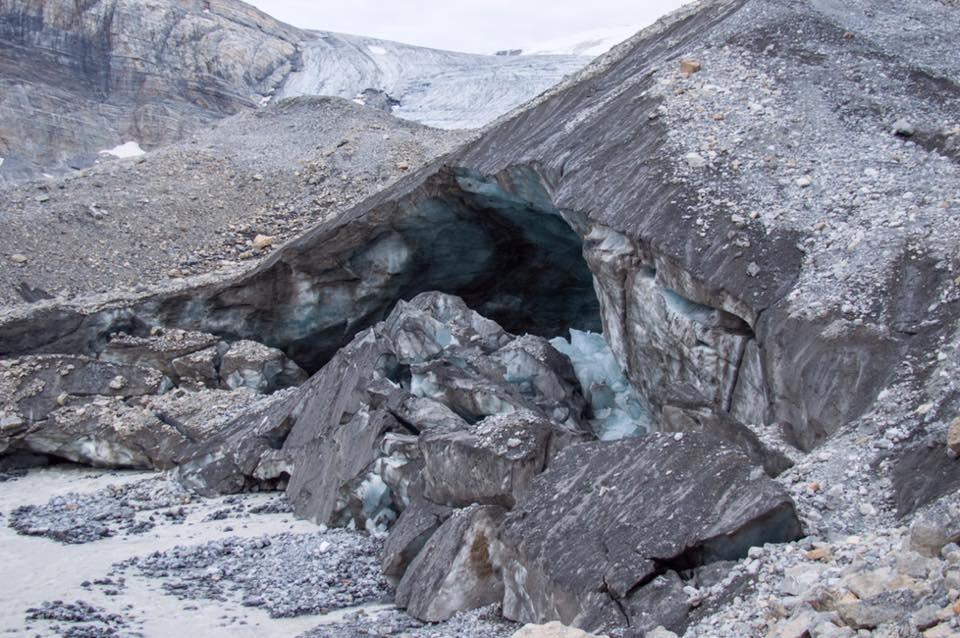 Images a sequence of Peyto Glacier from 2008. Also a comparison of Athabasca Glacier in 1993 and 2018.  It is shrunken and dark in 2018 from record hot weather in summer and soot from upwind wildfires in British Columbia (the same sent smoke to Norfolk that month). And a very depressing mass balance record – a bit of science.
Images credits to The Climate Research Unit in Canada.


Why is this activity important for your artistic development?

Just three months ago, the world’s climate scientists issued a stark warning – their starkest of many previous – that there are only 12 years remaining in which the take the necessary action to limit global warming to a level where the most catastrophic consequences can still be avoided. I believe this requires an unprecedented mobilization of all sectors of the community. Artists can play an important role in raising awareness and inspiring action. I would like to devote a significant part of my activity over the next years to this overwhelming threat and challenge to global well-being. I believe I have the appropriate techniques and skills to make a difference, especially when coupled with the expertise, experience and advice of scientists with a powerful background in climate science. It is so apposite that I am based in Norwich which is one of the global power houses in climate research. These connections will give me access to many aspects of climate research around the world. I want to be able to capture and represent subjects which give a strong sensory message about climate change, its threat and coping strategies. For that reason, I will be visiting a country where the impacts of climate change will be amongst the greatest: Canada. I will witness scientists work in forests, in snow- and ice-fields, in torrents, and sites of great drought. I will see, and talk to, communities which have been devastated by the extreme events nested in global warming. On a second trip, I hope to observe that iconic symbol of climate change: the polar bear as it waits (increasingly forlornly) for its millennia-old winter life-support platform of sea-ice to form.
I will learn how to meld such dramatic messages from another place to equally-dramatic, but less visual and consequential, in Norfolk. This will mirror the scientific connection. Prof Trevor Davies, who spent most of his career based at UEA, employed Prof John Pomeroy as a young post-doc. They worked together around the world, but especially in Canada. Prof Pomeroy is now Director of the Global Water Futures programme with 125 partner institutions throughout the world. Both are committed to continued collaboration with me, both for the first phases of this project and as it grows through future transitions – in scope and geographically. 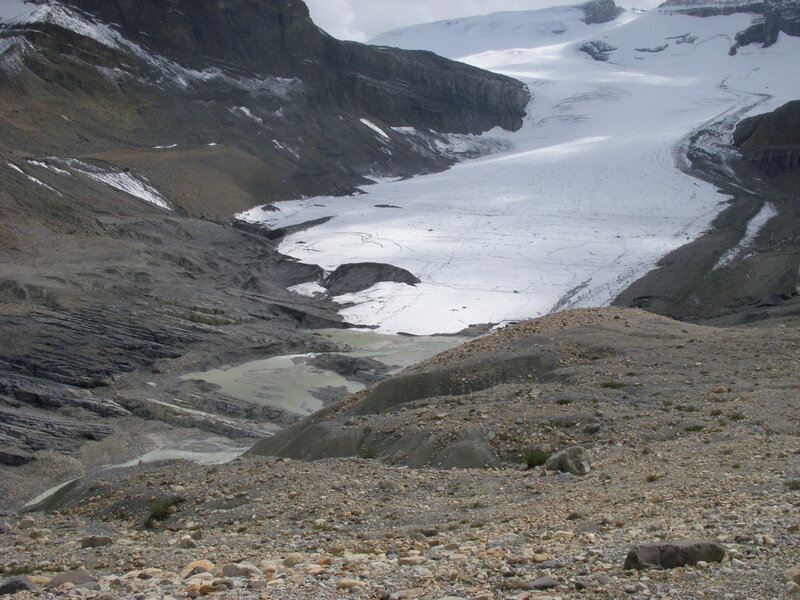 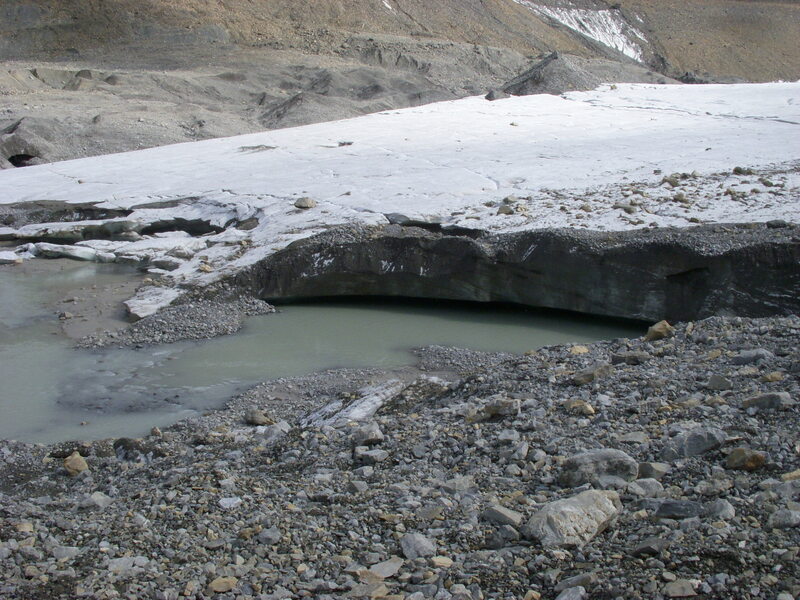 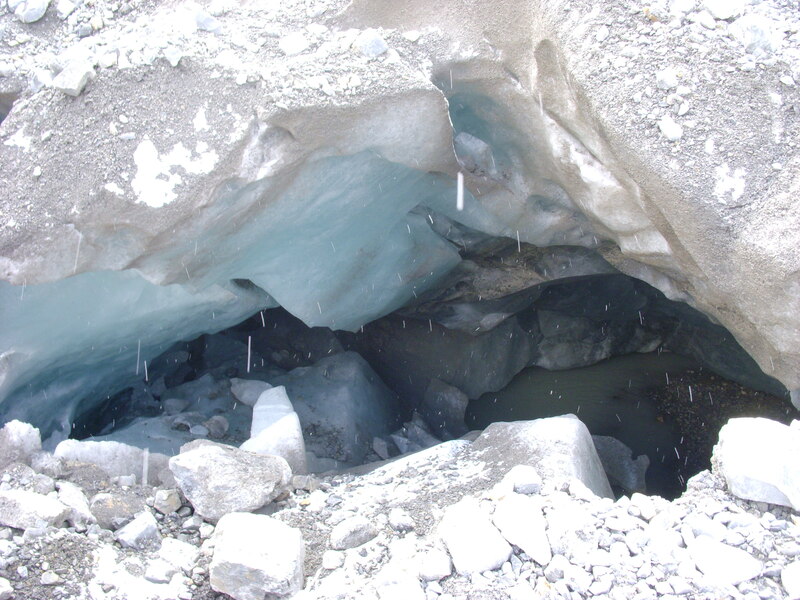 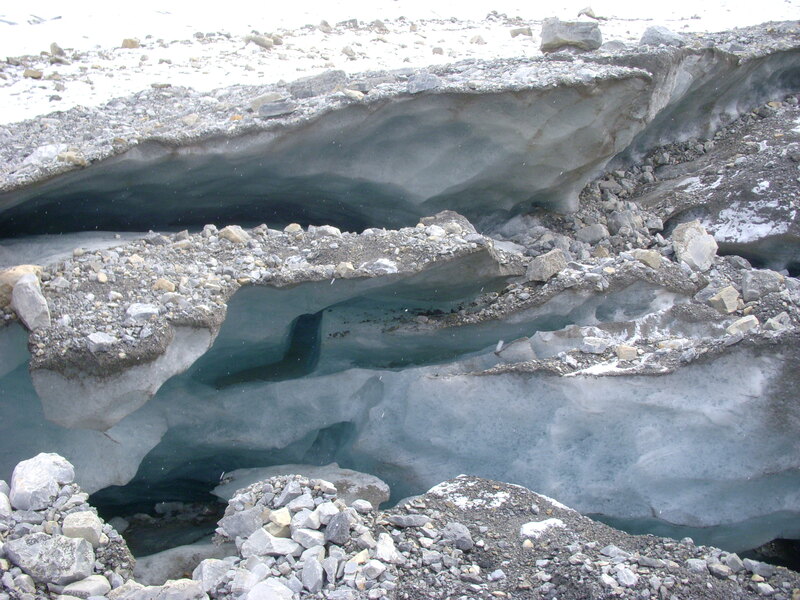 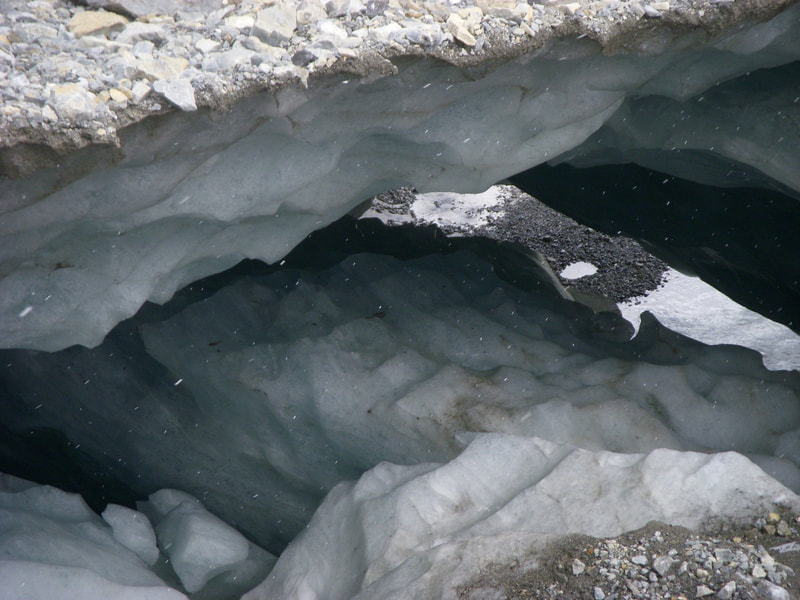 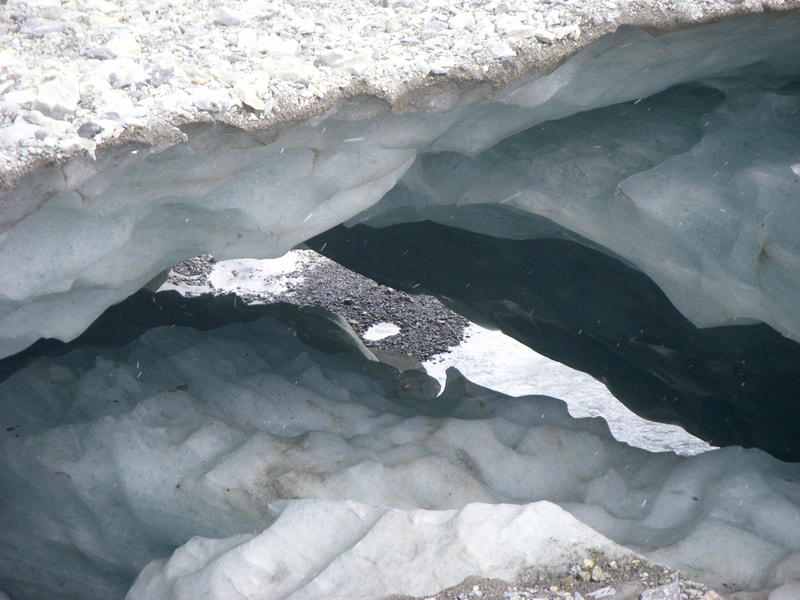 Proposed artistic activity
Funding is sought for the second phase of this activity. The first phase has been successfully completed. This was making contact with climate scientist Professor Trevor Davies, former Director of the Climatic Research Unit and Co-Founder of the Tyndall Centre for Climate and being tutored by him in the fundamentals of climate change and its impact, including the importance of transition processes (phase changes, etc) in the climate system, and how representations of water (in its various phases) - or the lack of it – can be used as a messenger and impact vector of climate change. Professor Davies has put me in touch with one of his close colleagues, Professor John Pomeroy who is Director of Global Water Futures (the biggest water research programme in the world) headquartered in Saskatoon, Canada. I, therefore, have unprecedented access to the global network of climate scientists. I have been invited by Professors Pomeroy and Davies to join them on fieldwork during the snowmelt season this spring at three experimental locations in Canada in: the boreal forest; the Rocky Mountains; Wolf Creek near Whitehorse, Yukon. All logistical support will be provided and the Global Water Futures programme has awarded a grant of Canada.
Canada is suffering extremes related to climate change - floods, drought, fires – and I will be able to immerse myself in the scientist’s work and how they organise research in extreme environments. My plan is to sketch, photograph, and video, record the parameters and features they are measuring: snow, snowdrift, snowmelt, ice movement and cracking, torrents, clouds, rainfall, wind, sunshine, etc. I want to capture the human dimension of the scientist at work, and also register how local inhabitants are impacted, and how they cope, with climate change.
I believe that I can start an effective dialogue with my new colleagues through an exhibition of paintings I am now producing on an iconic symbol of the Earth System’s vulnerability to climate change; the polar bear. My first paintings have elicited an invitation to exhibit them in Saskatchewan and Alberta, and a provisional invitation to observe this autumn – to help develop my stylization of them – as they await the build-up of the (diminishing) sea ice in Hudson Bay.
The spring trip to Canada will produce the materials (recordings, sketches, videos, paintings) to make installations, films, lectures, which I will use to link with representations of the nature of climate change and its impact on Norfolk – for example, coastal erosion (water as the vector again) with the cooperation of climate scientists in Norwich. The first product of this extensive programme will be an installation and art project in my name in Norfolk and Saskatoon. A second product will be an integrated multi-participant exhibition which will include videos, paintings, multi-material (and some dynamic) sculptures, photographs, sound, light, performance (dance, theatre, music, song, etc) – in an attempt to mirror the inter-connected multi-variable, multi-dimensional nature of climate change, the Earth System and the two-way impact on societies. 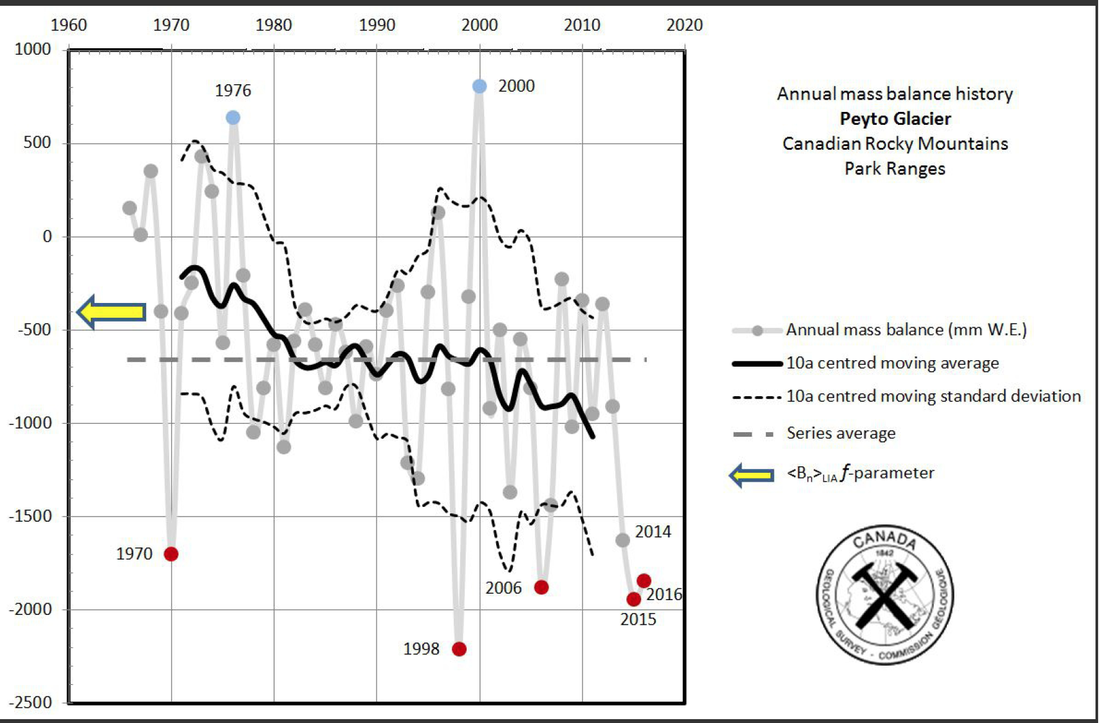